On Saturday, I ran the Free State Trail Race Half Marathon. It was a pretty tough and technical trail race in Clinton State Park with tons of rocks just waiting to take out some ankles, knees, and anything else you can fall on. Luckily for me, I did not fall! This race was everything I could have hoped for.

The night before the race, I outlined my goals in my Believe training journal. I had some secrets that I was keeping:

The starting line was pretty chill. There were definitely a good amount of people, but I wasn’t sure who was for the marathon and who was running the half marathon. I decided to just try to get towards the front and latch on to the leading girls. The race began on about a mile of road, so we took it pretty quick. I felt comfortable, and I knew that I had to stick with the leading girls if I wanted to place. The second mile took us through a hilly grassland that had good footing and was pretty easy to keep a fast pace. We were holding around a 7:40/mi pace and I was running with a pack of about 5 girls. We were chatting and laughing about how hard the 100k must be (there was also a 100k going on at the same time).

The race quickly made it to some pretty rocky single track trail. I reiterated my ultimate goal in my head a few times that I needed to keep my ankles healthy to get to the start of Colfax, so I let 4 girls go ahead of me while I slowed a bit to get better footing. The trails were beautiful and were relatively flat, but so rocky that it was not always possible to run.

I made it to the first (of 2) aid stations in 4th place. I stopped, got my water bottle filled and took off as quick as I could. At the aid station two girls passed me, so I pushed hard to catch up. It didn’t take too long, but I passed them both on a downhill and pushed hard to get out of sight. Once I knew they were gone, I held back a bit and did some easier running.

About 8 miles into the race, I came to a beautiful section of trail with giant rocks along the reservoir. The sun was coming out from the clouds and it was just a fantastic sight. The trail, however, was totally not runnable. I worried about taking a bad fall or turning my ankle, so I just walked. This went on for about a half mile as I tried to power hike through these sections. Finally, the trail lead to a rather steep (for Kansas) uphill and to a water station at mile 9. I knew at this point I was in 4th place, but there was a girl who was right behind me. The aid station was packed and there was talk about people falling on a few rocks and being pretty badly cut up. As they said this, a guy came running up with his knees covered in blood. It was a pretty gruesome sight and I was quite thankful that I decided to walk that rocky section.

I left the aid station and one girl had gone ahead of me. Now I was in 5th place with around 3 miles to go. I stayed back far enough to keep the 4th place girl in sight, but wasn’t feeling ready to make my move yet. At this point, I didn’t think placing in the top 3 was possible, so I was just conserving energy to get through the race and get back to training for Colfax. At mile 11, the 4th place girl slowed up a bit, and let me pass her. I figured at this point that I was going to finish in 4th place and was pretty happy about that. 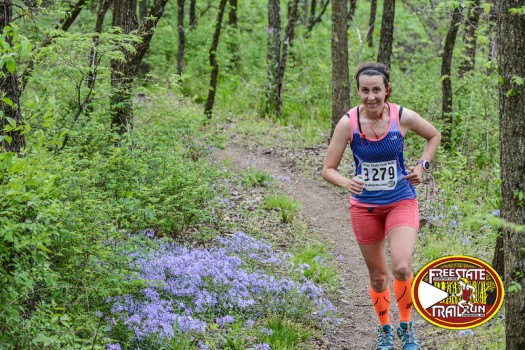 Well into the 12th mile, I saw the 3rd place girl running and looking pretty tired. I tried to calm my excitement and stayed a bit behind her so I could gather my energy. I saw a particularly wide downhill and figured that was my chance and I blew by her and sprinted away. I wanted to make sure that I looked strong and got out of sight fast, since I really didn’t want to sprint into the finish line.

I started to see a lot of people around, so I figured I was getting to the end. There was a final uphill spot and then I saw the finish line. I pushed through, tried to look slightly decent for the finish line pic (cause I always look like a crumpled mess) and finished the race in 2:08:45.

Definitely a personal worst (by over 10 minutes) on a very tough single track course. As I crossed the finish line, someone handed me a medal and a sweet little trophy for getting 3rd place female. There was no podium or anything, and I gotta say, I was a little bummed about that. Unfortunately, Frank was in the bathroom when I came in, so he didn’t see me cross the finish line. He was pretty excited to see my trophy though! Oh, and I definitely hit my “A” goal! 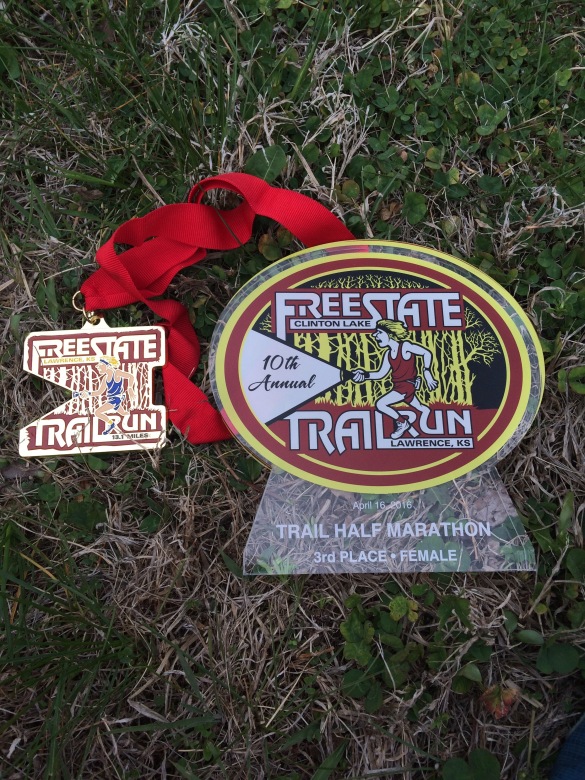 Overall, this was a great race. The race was put on by a trail running group called Psycho Wyco based out of Kansas City. They had a cute T-shirt and medal and I thought the no frills attitude to the race was pretty nice.  Also, the pictures were FREE!!! I love that! I would have rather had more aid stations, since there were a few times that I wanted water, but there was none available. Most people brought larger water bottles than me, so that might explain the lack of support (there were no water cups on the course). I am definitely going to sign up for more races by this group.

I had a ton of fun actually racing! Usually, I am just racing my previous times, but it is fun to go out there and actually race other people. I think you will see me doing a lot more trail races in the future, since I do have a ton of fun at them. I am super happy that I did this race without too much trouble, without tapering, and without a hiccup in my training for Colfax. I think I gained a lot of confidence at this race and I feel ready to coast right on over to my first marathon!