Manhattan rests in the floodplain between the Kansas River and the Big Blue River, both of which are seasonal and often too dry to paddle. However, over the past few weeks, Kansas has gotten a significant amount of rainfall, causing flooding damage throughout the city and the water levels in the rivers to rise significantly. Frank and I took this as an opportunity to take out our kayaks and finish a significant portion of the river.

On Saturday morning we gathered out gear, shuttled our car in Wamego (with the help of our friend, Zeb) and walked from our apartment to the Kansas River, which is a one-mile trek. Now, I don’t typically call one mile a trek, but when you are carrying all of the gear you need for an overnight paddle, plus two kayaks, one mile quickly becomes a trek.

Seriously, we probably looked like nutjobs walking through downtown Manhattan with kayaks.

We got to the river, set ourselves up and paddled away. It is kind of amazing how quickly it goes from a decent sized town to farmlands and wilderness. Within two miles on the river, you never would have known Manhattan was so close. 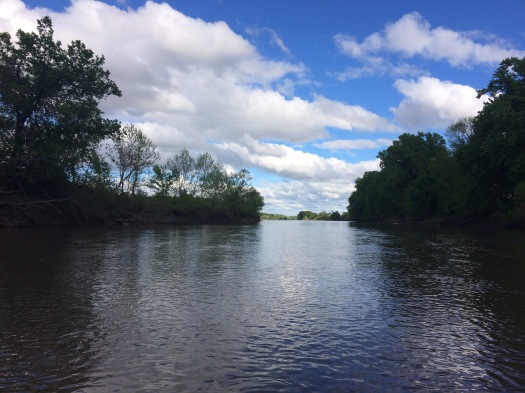 Since the water levels were so high, we were keeping a speed of about 5 mph without really trying. There was a lot of debris along the banks and on little sandbar islands, making it clear that the flooding had been pretty destructive out here on the river.

We paddled by a large group of frat guys from Kansas State, who threw full beers at us (thanks?) and cheered as we passed. They looked like a pretty fun (and drunk) group, but they were so loud we could hear them for another half mile. It kind of took some peacefulness away from the river. Fortunately for us, they were the only people we saw all day!

We stopped briefly in a small town called St. George, grabbed some food and paddled another mile before finding a small island to camp on. The sun was setting, and in full Kansas form, it was fantastic. Right across the river was an eagle’s nest and I could hear the occasional cry of the bird as I drifted asleep.

The next morning we woke up to some rather threatening looking clouds. We wanted to get to the car before it started to rain, so we packed up camp and got back on the river.

It wasn’t long before we saw the Wamego water tower and knew we were close to the car. The take out was a little funky and I managed to get my boat caked in mud.

It only took us about 6 total hours of paddling to make it from Manhattan to Wamego. We were a little disappointed that it was such a quick stretch of river and were hoping for a longer paddle. Unfortunately, because of the seasonality of the Kansas River, we had to play it safe, just in case the water was slower than we thought. Next time we are hoping to do a longer stretch, maybe all the way out to Topeka or Lawrence.

Paddling is always a super fun and nondestructive way to get into the wilderness. Kansas has very little preserved land and no areas for backpacking, so we were pretty proud of ourselves for finding a way to backcountry camp in Kansas.

Depending on the weather, we might be out for another paddle this weekend!