I had a great weekend! Here’s what we were up to!

I didn’t get back from work until pretty late, but Frank and I immediately went out to Red Butte Canyon for some trail running (me) and mountain biking (him). I mostly ran along the Bonneville Shoreline Trail that runs from Provo to Ogden and is pretty much a 5 minute drive from my house. Frank stayed on his bike, but I managed to get in a few miles and a whole lot of vert!

After the run, we went home and made dinner and watched Louis CK skits. It was a pretty chill night.

A while back, I saw an ad for the Ogden Climbing Festival at the climbing gym that we go to. They had a series of workshops, talks, free climbing, and a trail maintenance day. Of course I signed Frank and I up for the event. Saturday morning, we woke up early and went up to Ogden to help out some trail maintenance. Although we didn’t get a huge amount done due to weather, I did win a raffle for a pretty sweet rain jacket by a SLC based company.

Frank and I hiked a little bit before the workshops along the Pine View Trail. 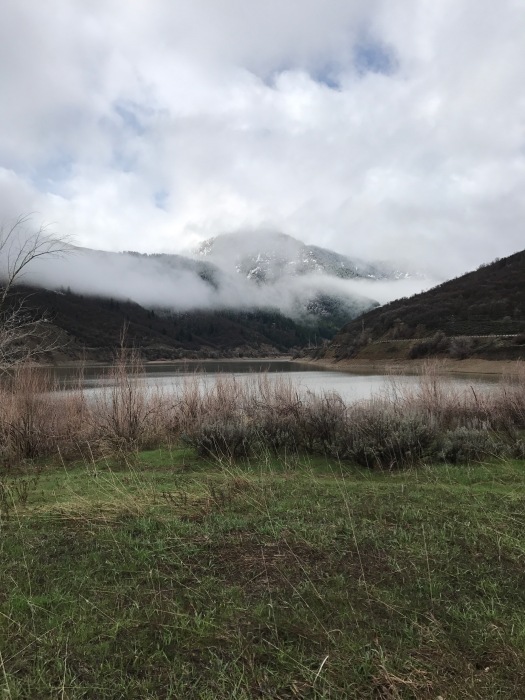 At 1:00, I took a workshop called Traditional Gear Placement and Natural Anchors. I learned a great deal, but unfortunately it was cut short by some pretty bad lightening. I gotta say, being stuck on the side of a mountain during a thunderstorm is not at all ideal.

The storm passed, so Frank and I hiked along some trails behind the Red Butte Garden with our friend Areli. Afterwards we all went back to our place for spring rolls!

Frank and I woke up to a bit of a winter wonderland. I think Salt Lake was having it’s last (hopefully) go at winter. We took the opportunity to grab the snowshoes and go for a beautiful hike.

In total, we did about 7 miles with over 3000 feet of elevation gain. Not too shabby!

That was pretty much our weekend! It’s never boring out here in Utah!

How was your weekend? Did you get outside at all?