The state of Utah has the highest population per capita of ultrarunners in the country. It’s no surprise why, since many of the best long routes are right in our backyard. We are within driving distance to some of the most well-known ones, including the Trans-Zion trail, Rim-to-Rim of the Grand Canyon, and of course the Wasatch and Bear 100 routes. This weekend I completed an equally awesome one, although much lesser known, The Wedge. It’s a 21-mile loop along a giant canyon called the Little Grand Canyon. But don’t let the name fool you, it’s not very little at all. 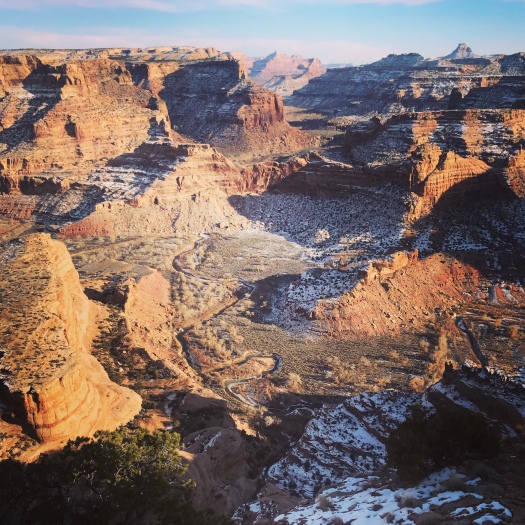 It’s not quite the right time of year for the route, and it had about 3 inches of snow throughout making it a little more of an adventure. The Wedge is only about 2 hours and 45 minutes outside of Salt Lake City in an area of BLM (Bureau of Land Management) land called the San Rafael Swell. The Swell is more well known for climbing and canyoneering, although it does have a fair amount of awesome running routes.

Time: 3-5 Hours depending on pace and picture taking

Permits or Fees: None

I got a late start, heading out around 10:30 am. It was very cold (17 degrees) and I reluctantly got out of my car to head out on the trail. I knew with the snow the route would take a little longer than usual. I started at the Wedge Overlook (between campsites 9 and 10) and took the road about 5 miles out to the other side of the Wedge. From here, I just winded my way back to my car at the overlook.

Normally, the route is pretty easy with only about 1000 feet of elevation gain throughout, but with snow and icy conditions, it was a little tougher than usual. The route is on a well traveled mountain bike trail, so if you’re ever out there be sure to stay on the lookout for them. I took about 3 hours and 45 minutes to complete the entire thing, but I did stop to take a lot of pictures.

It was a pretty awesome day on a pretty awesome route. I’m hoping to get back out here when the weather is a little warmer. The best time of year for this run is in the spring or fall when the snow is gone, but the desert hasn’t gotten too hot. If you’re ever in the area, I’d highly suggest making a short trip out to this gem. There are many variations of the route to either lengthen or shorten the run.

Years ago I had the opportunity to work in the summers on a field station in Alaska. I wasn’t there for a week before this little guy started living on my doorstep. Last night while going through some pictures, I found this one of my fox friend that made that season so much more exciting. #tbt #animalphotography #alaska #fox #photography #toolikfieldstation
I go to the desert as often as I can, but rarely do I capture a moment as fleeting as this. Fog descends rarely but allows you to see just how a place such as this got it’s name, Island in the Sky. I can be in this place 1000 times and only see this unique scene once. . . #canyonlands #canyonlandsnationalpark #utah #utahunique #utahisrad #naturalutah #pictureline #optoutside #nationalpark #nationalparkgeek #moab #desert #visitutah
I went to Arches National Park. There were lots of stars. 😜 #nightphotography #utah #utahunique #utahisrad #beautahful #nature #arches #archesnationalpark #archesnps #optoutside #pictureline #landscapephotography #stars
Yesterday I ran the Dead Horse 50K! I vowed to take the race easy since I was going into it very under-trained. I had fun, took it slow and managed to have a great day out on the course. #wmwranglers #trailrunning #ultrarunning #mountainrunning #utah #utahrunner
2016 A1A Half Marathon beautiful places Chicago Marathon Cold Colfax Marathon colorado Elly goals Hiking Kansas Marathons marathon training Mountains PRs Race Recap Race Week Racing runners Running running faster Trail Running Training Ultramarathons Ultra Running Uncategorized Utah Winter yoga yoga postures